Gettin' Our Purim On

There's a parade and festival at kiddo's school tomorrow to celebrate Purim. For the kids, it's a costume and cookies holiday, so you can imagine how much excitement and anticipation is building up around this house. And it's not just the five-year-old; Max and his father get to relive the good old days when Max would wear the awesomest homemade costumes ever at their local Purim celebrations in Ra'anana. Behold Young Napoleon: 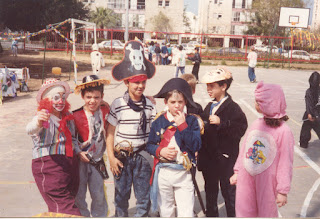 My father-in-law is killer with cardboard and an ace with duct tape. And Samson, who is already obsessed with the air force (hence one of the kittens being named USS Ronald Reagan), is FREAKING OUT about his super awesome costume...which I should be putting the finishing touches on instead of blogging. But here's the gist: 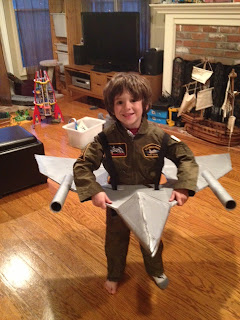 I'll have a better picture tomorrow after the festival. Hooray for quick dry silver spray paint!
Posted by Deborah at 8:41 PM