Toddling around the capitol

So we decided to drive to Sacramento for Max's birthday, mainly so we could stop at the outlet mall for some much needed retail therapy. You haven't seen a place until you've seen it with a toddler: Fairytale Town, Funderland, Sutter's Fort, Rick's Dessert Diner--plus, you run everywhere you go. 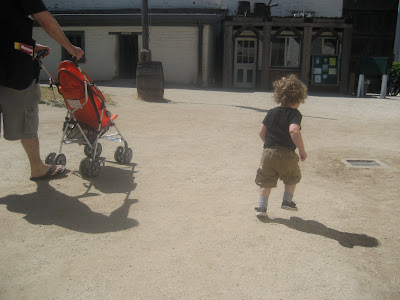 We had a great time--until Samson was attacked by an unruly display shelf in the Train Museum in Old Town. Note to museum staff: when directing a couple with a toddler to "the most toddler friendly area in the museum," and you go on and on about the Thomas the Tank Engine play area, you might also want to mention the low hanging shelves that line the walls in the 15 feet between the elevator and the play area. The low hanging shelves which are just about the height of a toddler head. With really sharp and pointy corners. I'm just saying.

So we didn't actually make it to any other part of the train museum that day; when the bump on Samson's forehead grew larger and larger before my eyes until it was the size and color of a small plum, we headed straight to the hospital. He's fine, it's only a goose egg, but we did decided to cut our trip short and head back to the Bay after that.

Luckily, we'd had a really nice time the day before--including an actual dinner out, the first in a looooong time. The biggest gun in my keep-the-toddler-quiet-in-the-restaurant arsenal these days is yogurt. 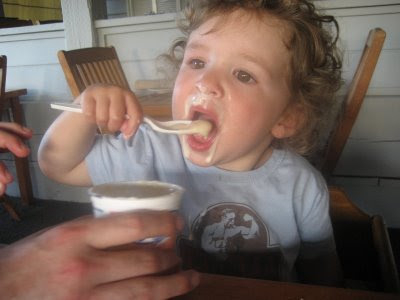 I said keep him quiet, not keep him clean.
Posted by Deborah at 9:33 PM No comments:

I can only say I'm sorry

Apparently, I haven't gotten any better at managing my time wisely, nor have I found a way to increase my energy to that of a toddler's. By the time he goes to bed, I have exactly enough energy to eat dinner, do the dishes, click a few buttons on the remote control and drag my sorry ass to bed. And it doesn't get any better in there; my dreams are weak interpretations of my slumber time environment or variations of the previous days events. For example, last night I dreamed about rich old ladies who lost their money at a grocery store (basically a re-do of the Law & Order: Criminal Intent episode I have watched on the DVR before bed), and about large, fluffy, black goats that had invaded our yard and wouldn't go away...all while Milhouse traipsed around the living room above my head, making infinitely more noise than a 12 pound cat out to be able to make.

I did, however, plant a ton of strawberries (literally. two thousand pounds of strawberry plants.) while Samson napped today, and yesterday I uploaded pictures of our recent comings and goings (like this one) and of the garden and its Springtime glory. So all is not completely lost.
Posted by Deborah at 9:28 PM No comments:

New York was a success, although I may have given you a different answer had you asked me on the airplane. Samson was a champ, the wedding was beautiful, and my diet was blown to hell.

Palm Springs--now that's some serious vacationing. Three days of girls only, no babies, low-cal cocktails and a nice shimmering pool. A girl could get used to this.

I promise, I swear, pictures soon and fun tales of bright lights, big cities and the Viceroy Hotel to come.
Posted by Deborah at 1:42 PM No comments: