Top Five Things I Am Thankful For

1. My brother is taking the kiddo to Children's Faryland tomorrow.

2. There's a four-day weekend just around the bend.

Know When to Fold 'Em

It's one thing to know WHEN, it's another thing to know HOW. Letting go--of anger, a grudge, regret, whatever--is a skill I do not have. I've never had it, and I doubt that I ever will. There are many things in my life that I have every right to be angry about, or to be sad about, or to hold a grudge against, and I perform that job expertly. Now if someone could just send me the Cliff Notes on letting go and doing the right thing even when you really really really don't want to...that would be very helpful.

Some say that mindfulness meditation will teach me how to let go of all of the shit that's gunking up my emotional pipes. Other say a cleanse of the body works as a cleanse of the soul. There are those that would suggest that I drown my anger and sadness in liquor. They are probably all partially right.

I know that right now is one of those time where I need to lay my cards face down on the table, stand up, and haul ass out of there. Guess I better go put my running shoes on.
Posted by Deborah at 4:32 PM No comments:

Zombie is the New Black

The kiddo has moved on from the youthful simplicity of tablet games like Angry Birds and Where's My Water, and left me way behind in the technological dust. Plants vs. Zombies is the game du jour and I am lost, lost, lost. Luckily, Max seems to get the basic strategy and appears to have schooled my boy in the ways of pea shooters and walnuts, so at least he can play on his own. But this is one obsessive habit that I will have to pass on. From what I can tell (not much), you need to defend your home from the constantly attacking cartoon zombies by using a variety of vegetables and plants with various levels of zombie-killing skills. And there's something about sunflowers. All I know is that the kid gets pretty frustrated when he wants me to play with him and I clearly don't get it.

Me: "Why don't you use that guy? He looks like he could stop a zombie invasion."

Him: "Seriously Mommy? You hafta put the freeze pods down first. The zombies will just eat those."

Me: "Put more sunflowers. They have smiley faces."

Him: (eyes rolling) "Jeeze Mommy, I already have five of those and that's more than enough. I need more shooters."

Him: "Are you even going to play?"

Him: "Isn't this the coolest game ever?"

Now I know how my mom felt when I would get so pissed at her if she got the name of my My Little Pony wrong. "No, THAT is Starburst! THIS is Moonstone! Seriously!"
Posted by Deborah at 8:35 PM No comments:

Pretty much all of my allotted blogging time for this evening has been usurped by ants. In the time it took me to spray the line of tiny horribleness with Raid, clean the cat food/water area they had invaded, clean up the Raid, replenish the cat fixins, and then repeat the whole process because it turns out they were coming in from two places, I could have written a very nice blog post. Hell, I could have written a weeks worth of very nice blog posts. But instead you get an angry and tired blog post, and with that, I bid you goodnight.
Posted by Deborah at 9:56 PM No comments:

Better than a Butterball

This time of year--well, most times of year--when people think turkey, they think roasted, basted, and filled with stuffing.

Some people, the ones with excellent taste in food, think thinly sliced, peppered or honey roasted, layered on a dutch crunch roll with plenty of mayo.

I also think of Turkey Sandwich, but mine doesn't have mayo on it (usually), because mine is a 55 pound shepherd mix who likes to put her whole head in my hand and loves to give kisses. 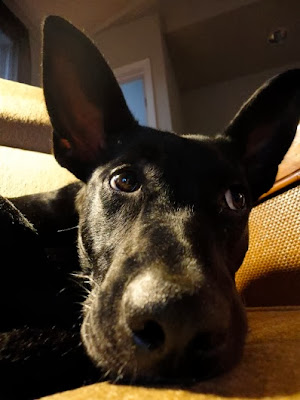 Turkey Sandwich is an amazing friend and wonderful member of our family, and I am extremely thankful that she is my dog. 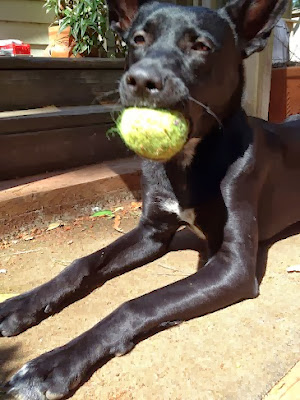 And someday, I hope she learns to drop the damn ball so I can throw it again.

Posted by Deborah at 8:00 PM No comments:

An outtake reel from the kiddo's birthday breakfast, in which he was shot by one of his parents with the Nerf gun he had just received as his gift. Which parent would do such a thing? Does it really matter? I wouldn't dream of being petty or putting the blame on just one parent--Max and I, we parent as a TEAM.

But it wasn't me.

Grey Clouds Rolling Over the Hills

I've had some cats in my time, but these girls take the cake. Elvis the Girl (aka Fat Elvis, aka The Chunker) is the first cat I've ever had who shows her belly--WILLINGLY--and not with the intent to attack your arm and slice open the fleshy part, either (I'm looking at you, Milhouse). She just wants to roll and purr and get some belly rubbins. She is rad.

Posted by Deborah at 8:56 PM No comments:

Too Tired to Type

It was a busy day at the shop. I didn't sleep all that well last night either, and these two things led to the creation of the following list.

List of Ways I Misspelled My Own Name at Work Today

Posted by Deborah at 8:37 PM No comments:

During a unit at school regarding homes, this happened: 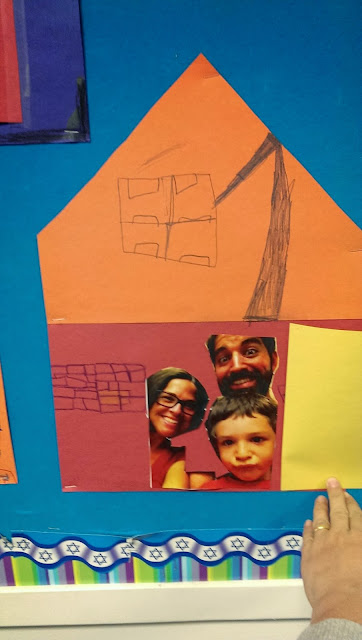 Posted by Deborah at 5:24 PM No comments:

It would appear that rubber band jewelry is this generation's friendship bracelet. It doesn't have the DMC beauty of the bracelets of my youth, and you probably can't tie one end to your toe to use as an anchor (genius!), but kept my kid quiet and entertained at the restaurant tonight. So its got that going for it. 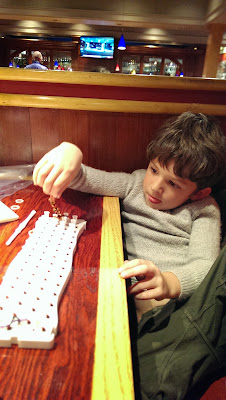 We're all loving up on the kiddo's birthday presents these days. This weekend, there were plaster molds, numerous volcanoes, and baking soda & vinegar rocket blasters!

There's nothing like science to bring out the big-eyed kid in all of us. SCIENCE!

Next up on the kitchen science list: making rock candy! Again, I say SCIENCE!

Posted by Deborah at 9:02 PM No comments:

Fall is Upon Us

You can tell that's it's autumn because I'm wearing rust-colored corduroy pants and a hearty brown sweater. Also, the maples in our backyard look like this: 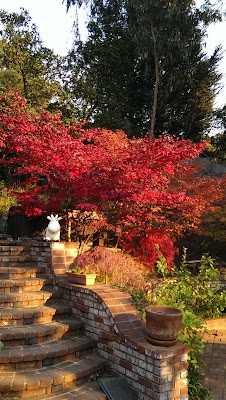 Posted by Deborah at 6:15 PM No comments:

How could post number 1001 ever live up to the hype of its predecessor, post number 1000? It couldn't, that's how. In fact, it won't even try. Here, watch some cute kittens instead:

That's Elvis the Girl on the left, and US Ronald Reagan on the right.

Posted by Deborah at 8:34 PM No comments:

You are currently reading the Extra Super Fantastic blog post number 1000. I know, right? For reals this time! Kind of nutty! Granted, some of those posts were very short. Some were less short, one might even say long.  Many were about music. Most of the early ones contain broken links or missing photos (hey, pobody's nerfect). But there were reports from Babyville! Posts about my dogs! And oh, so many lists of things!

Happy one thousandth blog post to me--and big ups to those of you who have supported me on this journey. It's been beyond therapeutic for me, and I gather that it's been somewhat pleasant at times for you alls as well. May it continue to be as such for many more years...until computers become obsolete and we all have special chips implanted in our brains and there's no need for blogging because we can all read each other's minds...hrrrrrmmmmmm.
Posted by Deborah at 9:05 PM No comments:

Says the kiddo: "You know mommy, let me tell you something about Legos. They're making the instructions a bit harder these days."

His awesome friends got him a ton of Lego sets for his birthday, and he's been systematically starting (and in some cases, finishing) each set. ON. HIS. OWN. I'm proud, duh, but really excited because it means I have to spend way less time on the floor which I am far too old to be doing comfortably. But, I get to spend just enough time examining his progress to see awesome displays of Legotry. 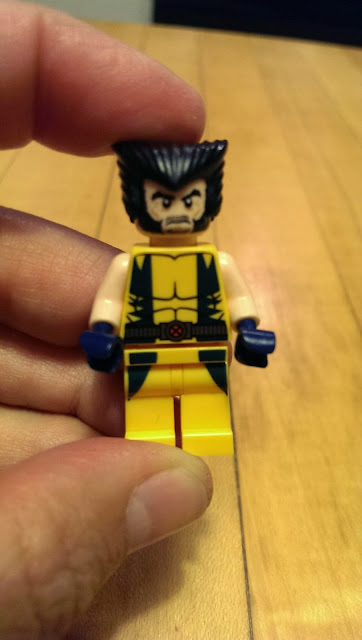 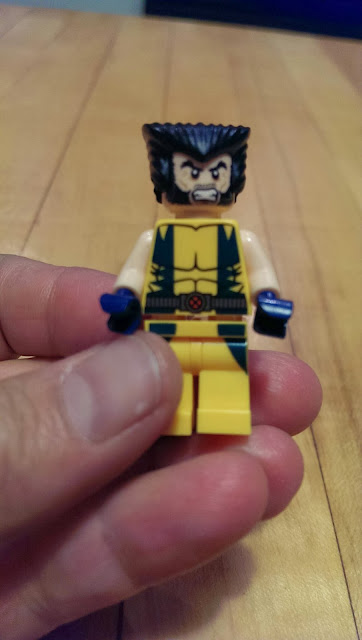 Posted by Deborah at 7:01 PM No comments:

The Party That Enveloped My Entire Weekend

Man, throwing a birthday party for a six year old is almost as exhausting as giving birth to the kid himself all those many (many many many) years ago. Every year we do it, and every year we turn to each other and say "NEVER. AGAIN." And then we see our happy kid, his happy friends, everyone covered in chocolate and various remnents of fun...

See you next year! 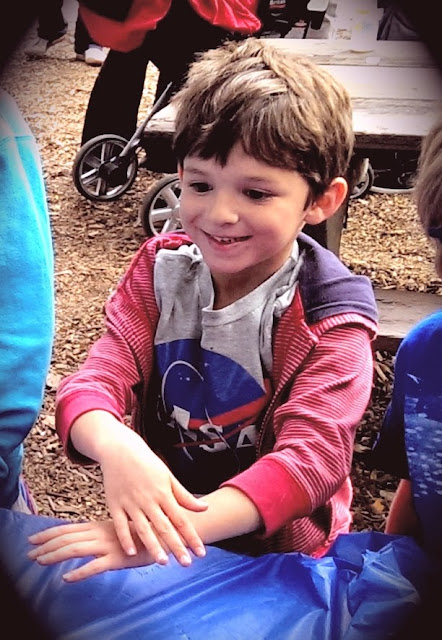 Posted by Deborah at 5:22 PM No comments:

I love my kitty girls and I LOVE Google instant awesome motion!

Posted by Deborah at 6:30 PM No comments:

After discovering last weekend that the kiddo's Halloween costume had disappeared into thin air, we were able to get a new (and significantly better) costume this week. Behold, Army Guy, also known as Mr. Camouflage: 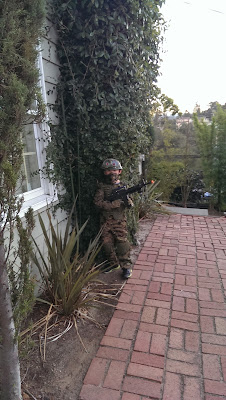 He did a great job not getting kidnapped, and enjoyed his bounty until it was time to turn the bulk of it over to the Halloween Fairy. Don't look at me like that, it's completely legitimate for a parent to reappropriate their child's Halloween candy in exchange for a toy.

Some candy was set aside, as is our tradition, for his day after Halloween birthday waffle. This here is one happy six-year-old enjoying his triple Kit-Kat birthday waffle. Happy Birthday, Mr. Man! 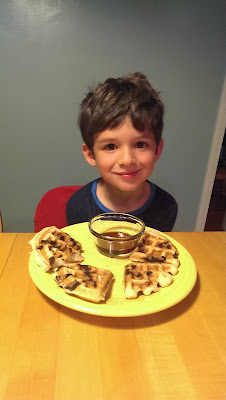 Posted by Deborah at 5:48 PM No comments: