Having a hard time finding the words this week. But the ongoing soundtrack is always there.
Posted by Deborah at 7:48 AM No comments: 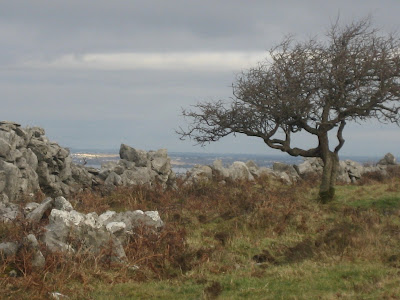 I had such a great time in the West yesterday! Megan and I took the train to Galway on Friday evening, which took about 2 1/2 hours. We had dinner in Galway and stayed at a little bed & breakfast near the town center. The next morning, Megan went to spend the day in Galway city, shopping and what not, while I took a bus tour that went through the Burren and the Cliffs of Moher, both of which are in County Clare. The Burren is a big, rocky area that is made mostly of limestone, and the Cliffs of Moher are very tall, dramatic cliffs on the Atlantic. Pictures are up on Picasa Web--mainly a bunch of pictures of rocks and cliffs, but there are some real winners in there.

The bus dropped us off at a farm house in the Burren where we went on a 1 1/2 hour guided hike through the rocks. John, our guide, had recently earned a degree in history and geology, and told us all sorts of interesting things about the Burren and how it has figured into Irish history, as well as how it factors into the lives of Irish farmers today. There are lots of fairy and pixie related stories pertaining to the Burren and the vegetation that grows there. Supposedly, the wildflowers there in spring are amazing--I'll definitely be heading back there in a few months for that.

Next we stopped off for a quick photo op at the Poulnabrone Dolmen, an ancient Stonehenge-ish tomb from 2500 BC. Very cool. 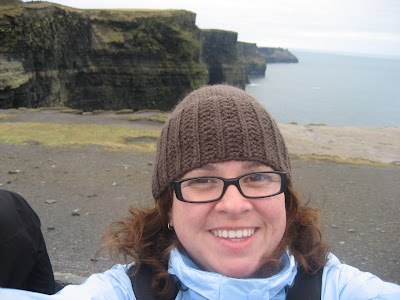 The Cliffs of Moher were amazing. They were a lot like the dramatic cliffs of Northern California and Oregon, but much much bigger--700 feet high! I couldn't get too close to the edge because they've built a wall that keeps visitors about 30 feet back. It gets really windy there, and a number of people have been blown off the edge over the years--for reals! During the spring, puffins roost on the cliffs--another reason to come back in a few months!

On the way back to Galway, we stopped for another photo op at Dunguaire Castle--one of the dozens of castles we saw. OK, not dozens, but enough castles that I lost count at some point. In the summer, this castle hosts medieval banquets. I'm definitely coming back for that.

This trip has opened up a whole new side of Ireland to me. Dublin is great, but it was so nice to get out and see what else Ireland has to offer. It was super easy to take the train, and I was able to get clear across the country in no time at all. I'll be taking the train to various points of Irish interest a lot more often from now on.
Posted by Deborah at 9:03 AM No comments:

I'm off to Galway this evening with a super awesome lady I met through the AWCD. It will be my first overnight-within-Ireland trip, and I'm pretty excited. The West of Ireland is what many Irish people refer to as the "real" Ireland, where lots of folks steal speak Gaelic and everything is a little bit country (as opposed to Dublin, which is a little bit rock and roll. Ha.).

And my travelling buddy is yet another cool person from St. Louis, which is a list that is getting disproportionately long.

But perhaps most importantly, a thousand heart-felt thank you's to my Minneapolis posse, who Fed Exed me a box of birthday taffy. I'm speechless with gratitude. Plus, my mouth is full of taffy.
Posted by Deborah at 7:23 AM No comments:

This is actually the first really tough day I've had so far with this whole quitting smoking thing. I think it was all of the rich, buttery french food we had at dinner last night. But all in all, this is way easier than the last time I quit smoking--knock on wood.
Posted by Deborah at 12:31 PM No comments:

It's not that I'm sad and lonely per se. I'm definitely in a sad and lonely phase right now, mostly because of the dark cold weather and lack of doggie and kitty friends in my life. Plus, today Max left for a week, so the apartment is a bit empty. Nothing that a good cuddle with Ozzy wouldn't fix. Sigh.

So I decided to do a Google image search for "sad and lonely" just to see what pops up: 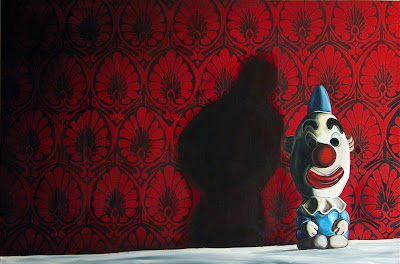 I'm pretty good at combating general sad and loneliness. Between knitting and various artsy craftsy projects, I can get myself pretty happy. Throw some videos into the mix, plus the fact that I'll be going back to the gym tomorrow since my cold is pretty much gone, and you've got a darn good defense against the blues.
Posted by Deborah at 5:30 AM No comments:

Happy Birthday To Me!

My birthday is so close to New Year's. It's almost like my New Year's resolutions are birthday presents to myself--along with that really nice silver pendant I bought myself at the Kilkenny Design Center.

Some of these gifts are the gifts that keep on giving--like quitting smoking--again (22 days!). Other gifts are the kind that are on-going, forever promises that never quite seem to stick--like getting healthy or loosing weight. Who knows? Maybe 2007 will be the year that I actually learn to like exercise or brown rice.

Today has been awesome. Max went out at the crack of dawn this morning to get me tasty Irish breakfast in bed! I've received phone calls, emails and chat messages from all over the globe, and tonight Max is taking me out to a nice French restaurant and a movie. Perfect! I love going out for dinner and a movie.

But the best part comes in a couple of weeks...

Euro Disney and Paris here we come! Birthday trip 2007!
Posted by Deborah at 7:50 AM No comments:

My triumphant return to Dublin has been mildly hampered by a sore throat and head cold (courtesy of the always-generous Max). Ugh. But I'm definitely on the mend, and I have a feeling that the package I got from LDB today will help speed up the healing process: bear pepperoni and venison sausage, the spoils of the Kisor's hunting trip last fall! I'm really excited to try it, albeit in a mildly disturbing way.

And a very happy to birthday today to my brother--have a beer on me!
Posted by Deborah at 9:43 AM No comments:

Yesterday's conference program ended at 2 pm, so I high-tailed it on over to Disney's Animal Kingdom to ride Expedition Everest. This is my first time at Disney World, and I can say this: it ain't Disneyland. Here are some of my thoughts on the matter:

1. Walt Disney is awesome. Sure, he may not have been to fond of us Jews, but the man had the perpetual imagination of a child. And a throngs of people to do hiss bidding. Lucky for us, his bidding included things like Sleeping Beauty's Castle and the Tiki Room and Epcot.

2. Going to a Disney theme park alone is different from going with a friend or group of friends. I spent a lot of time on my cell phone yesterday (as many of you know) as I wandered around the Africa, Asia and Dino Land USA sections of Animal Kingdom. But there's an upside: the Single Rider line. How else would I have been able to ride Expedition Everest an unprecedented 9 times in a row?

3. Even with a magical coating of shiny, sparkling Disney lacquer, a zoo is still a zoo, and I don't particularly like zoos. Yes, it was cool to see the giraffe and the elephant and the gorilla, and yes I took a barrage of snapshots like everyone else, but I left the area with sort of a frowny grimace on my face. It's hard to watch a bunch of little kids scream and yell and point at the monkeys. It made me feel decidedly frowny.

Coming soon: pictures and further musings on Epcot and the Magic Kingdom.
Posted by Deborah at 5:19 AM No comments:

Welcome back to Dublin. Here's your scarf.

I'm back in Dublin, just long enough to do some work, do some laundry and pack for my trip to Orlando on Monday. I've got 2 academic conferences next week at Disneyworld, and I'm very excited for my first time there, even if it is only on after 4 pm special conference passes. Both of these conferences tend to wear me out big time, so I'm going to do my best to drag my bones over to Space Mountain and the new Everest Experience one night.

I've posted some pictures from our trip to Israel on PicasaWeb. Enjoy! I had such a great time in the Golan Heights, and it was so awesome to see friends and family--exactly what the holidays should be. Good friends, good food, the requisite amount of stress, and lots of talk about the wedding.

When we arrived Tuesday night, the taxi line at the airport was way too long, so I decided to rent a car for the instead. It was my first time driving in Ireland, and it was weird as all get out, what with it being the wrong side of the car and wrong side of the road and all. I got us home OK, and a good 2 hours before we would have gotten home with a taxi, too. All's well that ends well.
Posted by Deborah at 10:52 AM No comments: