Well, it IS three times the bacon

What to get for the friend who has everything? Diabetes! 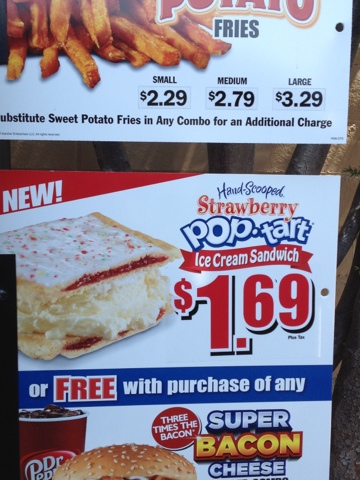 It's the part about the Pop-Tart ice cream sandwich being free with the super bacon cheeseburger combo meal that really makes speechless. That being said, I have nothing more to say.
Posted by Deborah at 9:28 PM No comments:

Just before the joy and wonder that is the first grade, the kiddo spent four days fighting an up-and-down fever that ended up being strep throat. Clearly, he is not my child, even though I'm *pretty* sure I gave birth to him all those years ago.
For me, strep throat is an obvious sign that the world is coming to a painful and grisly end. I'm talking fire and brimstone. For the boy, strep throat goes like this: "My neck kinda hurts. Will you play Legos with me?"
The doctor gave him cold, yucky, pink amoxicillin. Dr. Mom prescribed copious amounts of cartoons and a tiny dog. 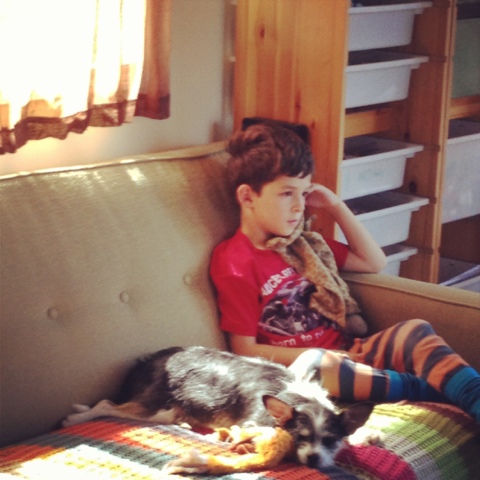 Posted by Deborah at 4:41 PM No comments:

Watch Your Back, First Grade

First Grade doesn't know what hit it. First Grade is all, whoa, man, what was THAT?! That, my dear First Grade, was forty-odd pounds of pencil-sharpening, snack-munching, lap-running, name-spelling DYNAMITE. 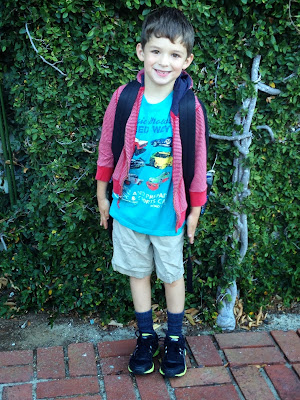 I'll give you a second to catch your breath. There you go.

After a house guest-filled weekend and a fever that just wouldn't go away (and ended up being strep throat!), he is pumped full of antibiotics and ready to dominate day one of first grade. He did confide in me that he's a little worried that first grade won't have magna blocks and that the toy situation in general will be "not super fun," but I have the feeling he'll be singing a different tune tomorrow afternoon.

Posted by Deborah at 9:54 PM No comments:

Fizzy has a fan club. Population: 1. 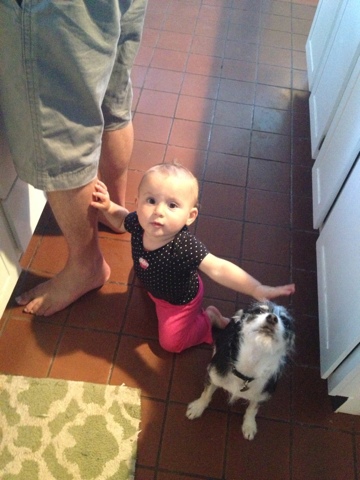 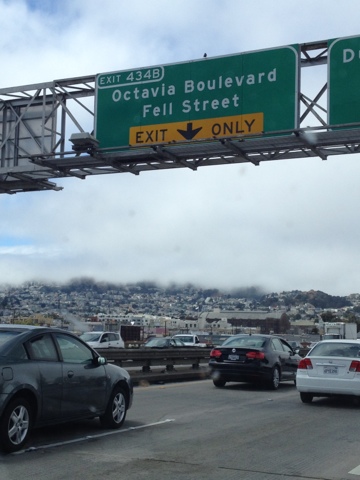 I kind of wish I could find a temporary tattoo of fog to cover up the Sutro Tower on my arm...
Posted by Deborah at 5:52 PM No comments:

Is there anything on god's green earth as adorable as a dog that desperately wants a piece of bacon?
I think we all know the answer to that. 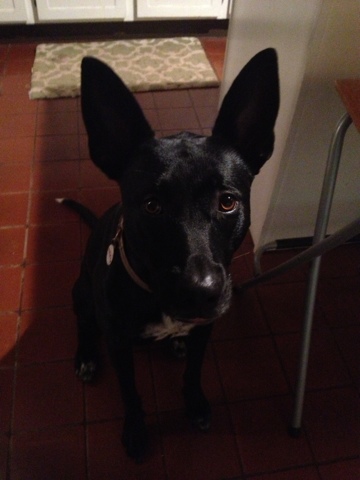 Posted by Deborah at 4:24 PM No comments:

Max and I celebrated our sixth wedding anniversary tonight with four of my favorite things: Thai food, salt water taffy, the kiddo, and a freak lightning storm. The three of us sat on the balcony, bellies full of red curry and fried bread, watching nature's fireworks over the Skyline hills, the taste of grape taffy still coating the sides of my tongue. Heaven on Earth, that's what that was.

It is now 40 minutes later. The kid is fast asleep and the dogs are trying to figure out how to remove themselves from the harnesses that arrived today from Amazon. Fizzy is attempting to rub hers off by way of the carpet (although she seems to have given up and is now curled up on Max's feet) and Turkey Sandwich is still trying to eat her way out of hers--it's comical, really, watching her try to maneuver her giant canine mandible through the yellow meshy chest piece. The only thing she's actually accomplishing is pushing herself backward in tiny increments until she almost falls over.

I just looked up from the keyboard to see her lying on her side, defeated (for now), and looking pretty pissed off in general. Did you know that dogs can glare?

Posted by Deborah at 9:29 PM No comments:

I hate the spiders. Which spiders? The spiders that are hiding somewhere either in my bed or my bra. Or perhaps they have some sort of elusive and well-planned attack route that makes them impervious to guard cats and loudly spoken curse words alike. The spiders that left me with THIRTEEN huge, welty bites in ONE NIGHT all over my upper torso area. IN ONE NIGHT. THIRTEEN. ARRRRRGH.

Only Madeline Kahn can accurately convey the hatred I feel toward these spiders, these evil and bitesy purveyors of pestulance, these tiny, psychopathic beasts.

I am Mrs. White and the spiders are my Evette. Flames!
Posted by Deborah at 9:08 PM No comments:

The kiddo is starting first grade in two weeks.

Ah, the joy of being a grader. I imagine it's a lot like kindergarten, but with less finger painting and more arithmetic. Maybe he'll start getting homework assignments. Maybe he'll have to study for a test. He has been expressing a healthy amount of anxiety, but tonight he is nothing but excited about his new Buster Posey lunch box and back pack.

We're excited to find out who his teacher will be, and which of his classmates from last year will be there with him. And if course, to find out which day is matzo ball soup and bagel day on the hot lunch menu.

It was great and outdoorsy. More to come. 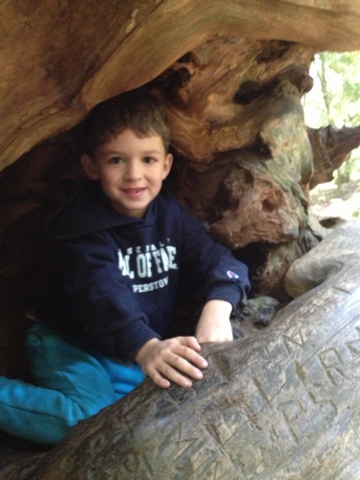 Posted by Deborah at 9:49 PM No comments:

Cheating on my true love

Don't tell Benihana, but were having dinner at Koto tonight. It feels dirty and wrong. 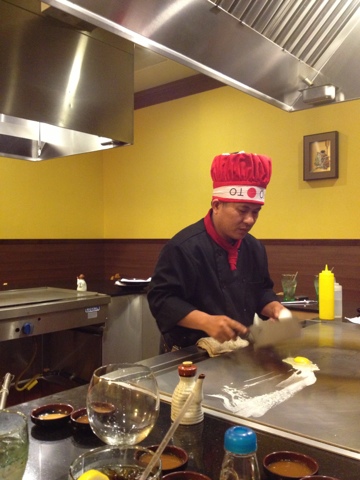 No blog tonight. Instead, this: 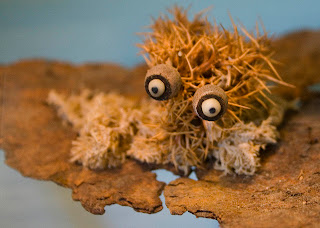 Songs About Kittens and World Domination

When the kiddo was singing a song the other day, he was using his annoying made-up language voice. Instead of trying to explain how annoying that specific creative outlet is to me, I asked him what his song was about and encouraged him to come up with some English lyrics.

What followed was a lyrical masterpiece about a race of super kittens who rise up to defeat and enslave humans, thus taking over the world. I'm pretty certain that this one will be on his greatest hits album, and covered by many of the young independent rock bands of his time.
Posted by Deborah at 10:03 PM No comments:

No, YOU are awesome

One of the funnest parts of being a parent is witnessing your kid's earnest attempt at performing a task that we do regularly without a second thought, especially when you can see the logic behind the process. It's clear that the wheels are turning, the right parts are connecting, there's just a little fine tuning yet to be done. Today's example: writing a note.
At Five Guys yesterday, the kiddo wanted to post a note on the customer comment board, letting them know how much he enjoys their tasty burgers and salty peanuts. 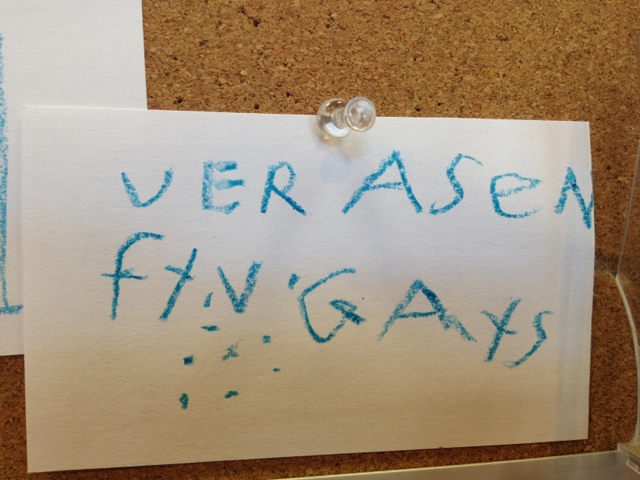 Translation: You are awesome Five Guys.
Also, those are sparkles, to show that he's serious.
Posted by Deborah at 8:39 PM No comments:

Sure, leaving the nest isn't exactly the same as losing their first tooth, but mommy bird who lives in the front yard and I are sharing the pain of growing children today. 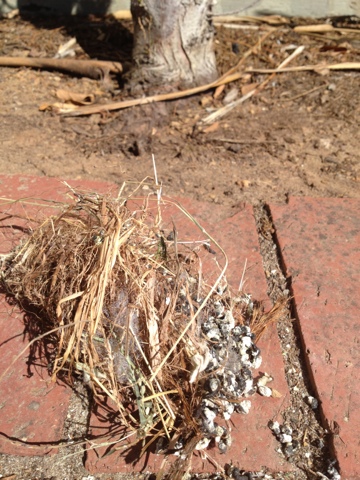 Sigh.
Posted by Deborah at 5:12 PM No comments:

More thoughts on losing the tooth

Samson's tooth had been loose for barely two days before it fell out yesterday afternoon. And by "fell" I mean "might as well have been yanked out by a rogue tooth fairy who was hopped up on goof balls." He had been very cautious, chose gooey foods over crackers or carrots, and made sure to brush his teeth VERY GENTLY. I was sure he had another week before that little gem came out.
And then, as per usual, the "do as I say, not as I do" clause bit us in the ass.
We were building a massive Lego tower--I mean MASSIVE. Around the third floor, we started to run out of sixers and eighters, so we scavenged through the big ol' box 'o random Legos looking for parts to reuse. There, practically glued to a flat base, were the last two pieces we needed. The kiddo went right work, using the most effective Lego-prying tool known to man...and pop, no more loose front tooth.
My parents always told me never to use my teeth as deconstruction tools (I don't know, something about them paying thousands of dollars for orthodontic work in the 80's), and I have been sure to tell my own boy that he should heed this advice, and that teeth are for chewing and brushing. But sometimes, the tamper-proof plastic wrapping on the unopened bottle of soy sauce needs to be removed and a sharp knife is, like, at LEAST ten feet away. And kids see EVERYTHING.
The moral of the story? Laziness makes your kids' teeth fall out slightly prematurely.
Posted by Deborah at 6:00 PM No comments: