Well, after another in a medium-sized string of disappointing manicure/pedicures (the Irish mani/pedi is a crap experience), I'm ready for our trip to Turkey. A whole week of tankinis, flip flops, shorts and swim fins! Not to mention ancient culture, like Ephesus, and super vacation-y boat trips.

You just know the pictures will be plentiful.
Posted by Deborah at 6:31 AM No comments:

Is this sofa getting smaller or is it just me?

I'm officially starting to feel large. Thick in the middle. When I lean against the kitchen counter in order to reach the handle that opens and closes the window, my belly goes "gooouch" on the inside. There's definitely something living in there, and he's getting bigger by the day. I'm really curious to see how big the baby will get over the next 5 months. They don't seem so big when they come out, but it seems like an awful lot of person to have hanging out in your belly where there isn't usually a person hanging out.
Posted by Deborah at 11:38 AM 2 comments:

It's been a while since I sat by myself on the sofa, laptop chugging along, and laughed out loud at something I read online. I don't mean chuckled or even giggled, but straight up laughed, hardee har har.

Yesterday, that all changed.

I got to this link via Liz's site and a link she had posted in her sidebar, then a link that site had in it's sidebar that led to a page that linked back to the original on Design Observer. That's a lot of linking.
Posted by Deborah at 7:49 AM No comments:

This year I'm joining the inspirational Laura and her team of ABC 7 cohorts on the AIDS Walk. I've sponsored Laura in years past, but I've never actually dug my heels in and participated on the 10K walk through glorious Golden Gate Park. But since this year's walk is on July 15th, the weekend after I make my triumphant return to the Bay Area, it seems fitting that I pack my dogs into my Subaru wagon and head up to the city to be a part of Laura's team. I'm really looking forward to it--the walking, the seeing good people, the getting out and about with dogs, and the supporting a good cause. I've always been a supporter of the ASPCA and various dog and cat rescue societies; I have no problem opening my heart, my home, and my wallet to soft furries. And I've been known to sponsor my friends who have the heart and the time to do things like AIDS walks and MS rides and cancer runs. But I've never been as generous with time as I'd like to be. Call it a belated New Year's resolution, chalk it up to mom-to-be syndrome and wanting to make the world a better--if not perfect--place before my due date. Call it whatever you want, but call it a good thing. And you can do a good thing too by sponsoring me on the walk! Of course, the easy, online sponsorship form requires the use of my first and last name, obviously not blog-friendly content. So if you want to sponsor me and don't know my last name, take an extra step and email me and I'll send you the sponsorship instructions. Go team no more AIDS!
Posted by Deborah at 1:27 PM 3 comments:

Other US-centric cravings:
Froot Loops
Thai food
Chorizo Burritos
Posted by Deborah at 11:13 AM No comments:

There's a terrific Irish movie that seems to be getting a major-label release in the US. Once is not to be missed, and I'm telling you all now: find out when and where it's playing in your city and GO SEE IT. Then go buy the soundtrack. It sounds like this.
Posted by Deborah at 1:38 PM No comments:

Does anybody remember this kick ass TV show?

Wow, I loved that show. I think I was in 4th or 5th grade, and like any 4th or 5th grader, I was really into the whole lip-syncing and making up dances kind of thing. This show had everything: lip syncing, choreography, teenagers--perfect for the all-important 10-year-old demographic.

Everyone who knows our engagement story will not be surprised to know that we've considered incorporating some choreographed lip syncing into our wedding ceremony, specifically Michael Jackson's Thriller. When the story of your proposal involves zombie armies and general living deadness (zombie armies and general living deadness that can shake their undead booties, mind you), it's only natural to bring it when it comes to the wedding. Sadly, we're not the only ones with awesome ideas like this.

Of course, ours would be much better. But our wedding's going to be so small that everyone would have to join in, including the dogs and the rabbi, for it to have any real impact. I'm not writing the choreographed lip syncing wedding segment off altogether, but maybe something a little more duet-friendly. Like (I've Had) The Time Of My Life from Dirty Dancing, or Tonight, I Celebrate My Love by Roberta Flack and Peabo Bryson. You can't loose with a name like Peabo.
Posted by Deborah at 8:27 AM No comments:

It turns out that I was quite ambitious in my Scottish trip planning, as far as distances between destinations go. We did a ton of driving over the bank holiday weekend, and we saw an awful lot of Scotland. The iPod rwally came in handy, providing us with 3 days of extra super fantastic driving tunes, from Weezer to Neil Diamond to David Bowie to Neko Case. Of course, it was amazing! We spent most of the time in Highlands which is known as the UK's wilderness area. There were tons of lochs, dozens of castles and ruins, and copious amounts of sheep and pheasants. Pictures are up at Picasa Web, and I apologize for the obvious lack of sheep. 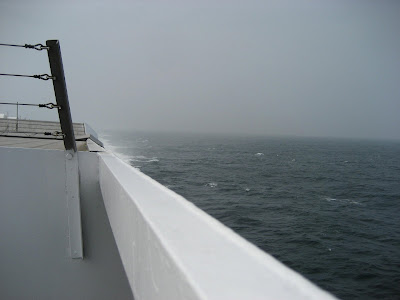 On Saturday, we took the ferry from Northern Ireland to Southern Scotland and proceeded to drive up the west coast along Loch Lomond to the lower-to-central Highlands, spending the night in a wonderful hotel in Ballachulish. Max encouraged me to try the haggis, and I have to admit, it was pretty darn tasty. I won't be rushing over to the interweb to look for any recipes, but I did enjoy it. 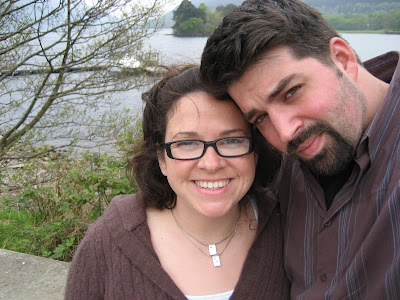 Sunday was whiskey day, and we drove through the Highlands up to Loch Ness and east to the River Spey where a good deal of Scottish single malt whiskey is distilled. On the way to our first distillery tour of the day, we stopped on the Glenlivet estate for Max to try his hand at clay pigeon shooting. (No clay pigeons we're harmed, but Max's shoulder is a bit worse for wear.) We toured The Glenlivet and Glenfiddich distilleries, learning the intricate differences between Scottish and Irish whiskey--Max is a total expert at this point. We also happened upon the annual Speyside Whiskey Festival which brought together a lot of smaller, independent distilleries--and more tasting. It was beautiful driving, and a lot of fun. To top it all off, we stayed the night in an old castle that had been converted into a hotel. It was really something special, and the grounds were astounding, not to mention the food and hospitality. 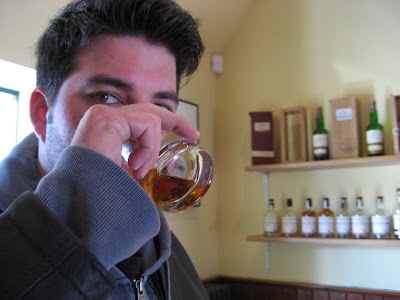 We started off bright and early Monday morning to make the long drive down through Braemor, Perth, and Glasgow back to the west coast to catch out ferry back to Northern Ireland. The weather was dramatic and mixed, with lots of heavy spells of rain and bright sun and rainbows all over. We drove the last leg down from Belfast to Dublin and arrived home as two very tired, but very happy and satisfied road trippers.

Next trip: Bodrum, Turkey in a few weeks, followed by Spain in June.
Posted by Deborah at 8:05 AM 2 comments:

We're off to Scotland tomorrow morning, bright and early. We'll be driving up to the North then taking the ferry across form there. Then it's on to the Highlands (there can be only one) for whiskey tasting, haggis eating, and castle sleeping-in-ing. Huzzah!

And then, of course, there's the elusive scotch egg.
Posted by Deborah at 10:06 AM 3 comments: