We had a terrific time at the beach today. Great friends and lots of pretty fog, we were able to avoid the hot hot hot that had been forecast for the area. Turkey Sandwich and Fizzy were exceptionally well behaved, especially when they met a horse for the first time. Fizzy treated it like any other living thing--she barked at it, repeatedly. Turkey barked some too, but mostly she switched back and forth between crouching low and looking distrusting and trying to smell the horse's behind. Later on, a few large groups on horseback came through, but non them really even seemed to notice any of the dozen or so dogs enjoying the day with their humans on the beach. 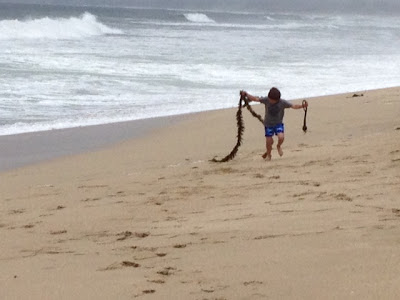 The fog and chill didn't stop Samson and his pals from playing in the surf, digging, finding Dr. Suessian sea weed and having a wonderful time. The Pacific Ocean is a magical thing and today was certainly a day where I was very glad to have it play such a prominent part in my life. Our blood is supposed be 83% water, so I guess it makes sense to be so incredibly attracted to it.