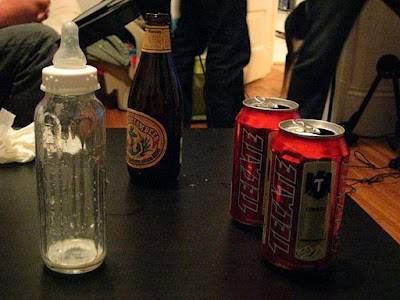 January started out cold and wet, and month three started out with one angry baby. But the Week of the Furious Infant gave way to more of what I've become accustomed to--a lot of laying around, looking at things, eating hands, a few hard-earned smiles. Samson's two month check up involved being stuck with all sorts of horrible needles and lots of screaming, plus a weigh-in of 12 pounds 11 ounces (by the end of the month, he had reached 14 pounds 5 ounces). LDB came to visit for a few days, and Max went on his first post-Samson overnight business trip. Bedtime remained steady at 9 pm, sleeping through to 8 the next morning. 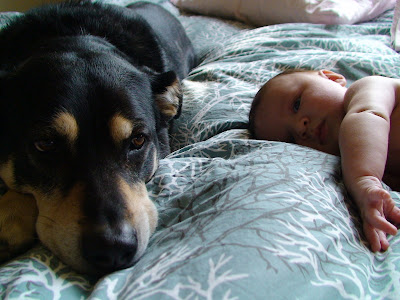 According to my all-purpose online baby development resource, at eleven weeks: "Your enterprising youngster is well on his way to mastering the concept of cause and effect. He’s already learned that his cries evoke a response from you and other caregivers. He’ll now begin to vary his cry to signal different needs".

Samson has one need and one need only. He asks only that you hold him. Hold him and engage him and entertain him and FOR THE LOVE OF GOD DON'T PUT HIM DOWN. Oh, the crying. The screaming and howling and whining and crying. If that's what they meant by beginning "to vary his cry," then they're NUTS. Way not to warn me about my soon to be intolerable baby, iVillage. 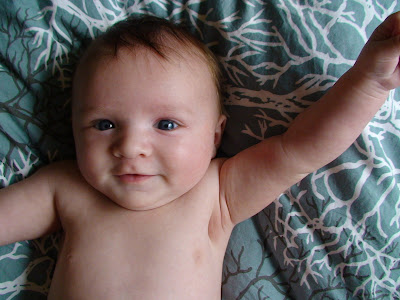 Of course, when he's receiving proper attention, he's cute as a button. Lots of smiles, his first couple of laughs even (!) and his first attempts at screeching (greeeeeeaaaaaaaat). He can officially grasp some objects in his hand or hands and successfully hold on to them for extended periods of time, shake them, and cram them into his mouth. This to me is the giant milestone of month three. It was so wild the first time I put the green rattle that Maggie sent us in his hand and he held on to it and shook it. It was like he'd made this huge leap from being a newborn to being an infant. I remember it like it was just last Tuesday. Oh wait, it was just last Tuesday. What a great birthday present. 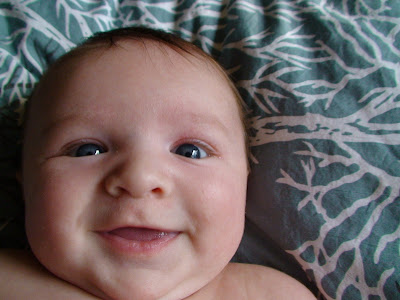 He still sleeps a good 10 hours or so at night (THANK GOD) but his bedtime has gotten progressively earlier. He's now asleep by 7:30 or 8, which means he wakes up a little earlier, too. And I tell you, 6:30 am is a lot better than it could be. I want to complain about having to get up so early every day, including weekends, but he's usually so happy to see me that I really can't. 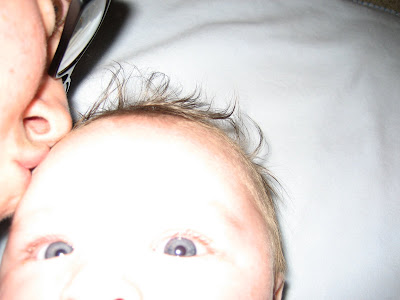 There were other things that happened during month three, bad things. Shameful things. Like when I was clipping Samson's fingernails and accidentally clipped the top of his finger. OH THE HORROR! THE TEARS! THE SCREAMING! And that was just me. Month three also saw the first usage of TV as baby sitter. Go ahead, judge me. I deserve it. But if it means I can have five minutes to make coffee and feed the dogs, TV is welcome in my home anytime, thank you very much. To take the associated guilt down a notch, I bought a Baby Einstein video, so at least Samson's TV time is educational. Right? 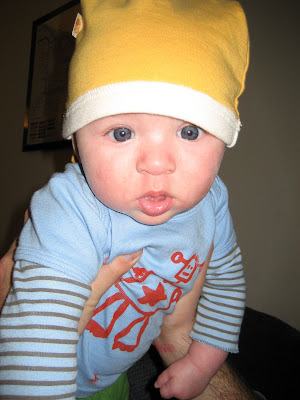 All in all, month three kicked ass. Samson is definitely developing into a real live baby, and even though I really enjoy this move from newborn to infant, I kind of miss the fleshy little bundle that used to lay swaddled in my arms (we dropped the swaddling around week 12 and moved up to sleep sacks). I barely recognize him in the pictures from his first two weeks at home, so scrawny and small and absolutely perfect. If this is how it feels to look back after three months, I can't even imagine how it will feel after six months. Or a year. Once again, to those people who keep telling me to "cherish every moment," I say you suck, but you're right. It's hard for an impatient person to learn to enjoy the present as much as it deserves to be enjoyed, but I'm trying my hardest.
Posted by Deborah at 9:45 AM