and that's all I have to say about that 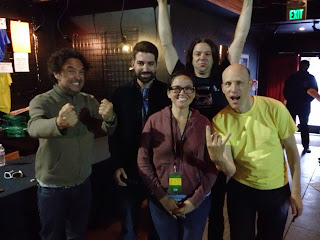 I splurged for Max's birthday last week and got us a pair of VIP tickets to see PUSA at The Independent in SF. It was a great show, high energy and a real blast from the past. They played the whole first album and I find album shows to be a real treat. It ties in with my love of theme-based entertainment and gives me a sense of commeradere with the band without feeling like a crazed uber-fan. This last point is rather important to me.

When Gigantic came out, I was thrilled and excited to see a full length film about my all time favorite non-Beatles band. They Might Be Giants were among the first bands to really utilize the web to spread their music and form an online community. As a junior high school student, wise beyond my years, I started a chat forum on Prodigy in 1989 so that I could discuss the genius and poetry of TMBG with other fans online. Gigantic, released in 2002, showed an image of obsessive, needy and highly unsocialized folks who felt that John Linnell & John Flansbugh were the Only People That Really Understood Them--and as much as I could relate to the elation that TMBG's music could bring, I felt horrified to think that I could ever be like one of those groupie-type fans. Not me. No way.

I've been wary of VIP events or any sort of meet-and-greet ever since. I think the PUSA event worked for me because I only actually know a couple of their albums. I don't have to hide my uber-fandom because I'm not an uber-fan, neither is Max. Its was exactly what a live music show in the city should be: a fun night out without the kid and plenty of strong drinks at weird Ethiopian bar.
Posted by Deborah at 8:57 PM