Momentous occasion! Max is now an official US Citizen! A whole bunch of us trekked over to the Paramount Theater in Oakland this morning to watch him (and 1,104 others) get sworn in. It was pretty cool--they were playing the soundtrack from A Clear and Present Danger over the PA system as we filed into the building. The inductees were directed toward the general admission/floor area while everyone else went upstairs. There was a lot of cheering--the whole lower & upper balcony area was filled with family and friends, and everyone got a chance to hoot and holler as the official-type lady read a list of all of the countries (over 100!) from which the new citizens hailed. You could hear our proud little 5-year old cheer for Israel, although he later informed me that he also cheered when they announced Egypt on the list--you know, "because pyramids are really awesome."

The kiddo, dapper as always, saw this as a terrific opportunity to get his tie & blazer on, as did Aba--and they celebrated the end of the 90 minute event with a dance party out front. 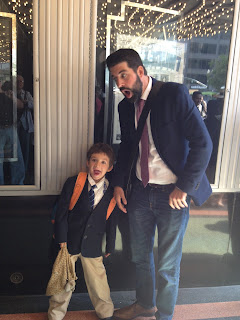 Welcome to jury duty, my love! Welcome to voting and a MacGyver--looking passport and constantly shaking your fist in Washington DC's general direction (yes, I realize that you don't need to be an American citizen to do that.)! I guess I can't threaten to have you deported if you don't put your socks in the hamper anymore.