Two months old! Amazing! What a terrific month it's been. First bath, first smile, first night out for mommy and daddy... 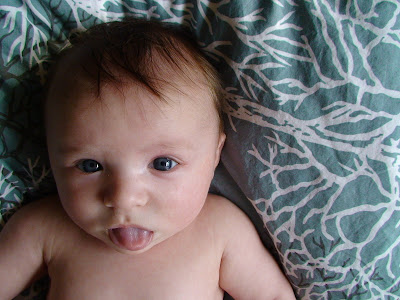 Month two started out with a serious growth spurt that seems to have carried on throughout December--he's been putting on about a pound a week. When we go to the doctor on Friday for his 2 month check up, I'm betting dollars to donuts that he hits 13 pounds.

All that weight gain caused a shortage of baby clothes, not to mention a pile of too-small diapers. He outgrew both the newborn and size 1 diapers this month, and he's mostly wearing his 3 month-sized clothes now. Some of his favorites are the Sutro Tower shirt from Uncle Paul and Kristy in Brooklyn, and the stripy terrycloth dinosaur snuggy. Can an infant have favorite articles of clothing?

We started to get comfortable with leaving the house this month. We took Samson to his first restaurant--Black Angus, because every 5 week old baby loves a good top sirloin--and to our first mommy and me type of group at the local hospital. I continued my blatant disregard for nearby diners by taking him to more restaurants throughout the month: The Planning Shop's annual holiday luncheon at Left Bank, lunch with Dana at Modern Tea ("It's not called Modern Coffee"), a sushi outing with 5 other couples and 3 other babies, none of whom we'd ever met before (intrigued? More on that later), and last but not least, breakfast at Ihop. Most surprising, we got comfortable leaving the house without Samson, and went on TWO date nights while the grandparents completed their re-education in diapering.

We went to San Francisco a few times this month, and Samson got to meet a lot of his honorary aunts and uncles for the first time. Hopefully, we have successfully fooled our age appropriate coupled friends into thinking that babies are all sunshine and lollipops, and they will start popping out little playmates for Samson 9 months from now. 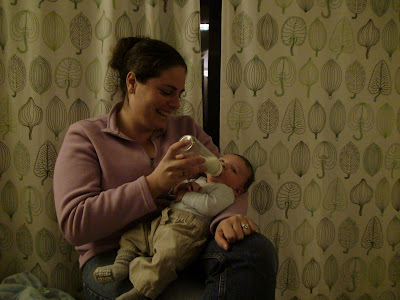 His first smiles started coming this month, too. It's the best. thing. ever. He's still making us work for them; there's more funny face making and bleh-bleh-blehing than I care to admit, but it's fantastic when he throws us a bone. Equally as fantastic are his sleeping habits. We began doing the bedtime routine early in the month. We knew that he wouldn't be sleeping any differently, it was more to get him and us used to a routine so that when he was able to sleep longer, he'd already have a familiar set of cues that would help him know it was time to do so. Who knew that time would come so soon! Go ahead and hate us, but our awesome little baby has been sleeping through the night for almost three weeks now. I once heard a statistic that all mothers lie about when their baby starts sleeping through the night--"through the night" is defined as five hours, by the way. I swear to you, I am NOT LYING. Samson regularly sleeps for 7-10 hours at night. It's fantastic. I don't know how long it will last--could this be some sort of wonderful flukey phase?--so I thank my lucky stars every time I wake up and the sun has already begun to rise and the baby's quietly sleeping in the next room. This is what heaven must be like. 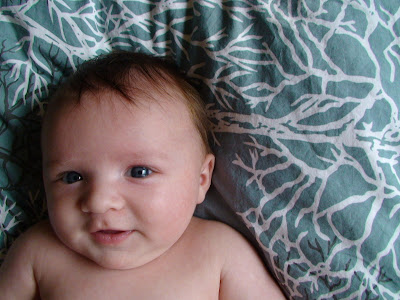 This has also been the month for noticing the animals. Samson has begun to really enjoy staring at Ozzy and Miru in particular. He's also started to make little cooing noises, lots of "oh" and "ooh" types of sounds. And then there's the grabbing. Of course, we consider all of these to be signs of great intelligence and have already enrolled him in advanced placement calculus classes.

This month also saw the triumphant forward-facing usage of the Baby Bjorn, and a blossoming love of hand-eating, which are, like, the two cutest things on the face of the planet. Obviously, it's been quite a month. It's been a lot closer to what I think of as "normal" than the first month was, and I'm betting that this trend will continue. It's really sinking in: I'm a Mom. This is my Son. This is who I am now. It's not the only thing that I am, but it's a pretty big thing, and it's a pretty new thing. And I think it's a pretty damn great thing. 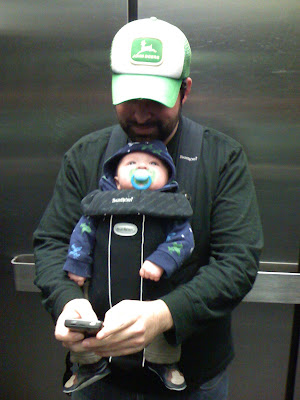 It occurs to me while you write this that this blog is probably one of the best gifts a mother can give her future son.

So here's my message to teenage Samson. Hey Samson. Gee-willicker, your mother and father are darn-tooting tops... Okay, we don't really talk that way in 2008. Sorry.

Really though, your parents are (were?) about the coolest people you can have as parents. They are the most loyal friends and always up for pretty much anything. They are very smart, have great and funky taste. Your Mom is a great writer and you Dad gave up smoking for you and he is trying to learn the guitar for you too. They both have the most open minds and are about as caring and generous as any boy could wish to have.

Think about that before you even consider doing drugs or shoplifting.

It's funny you would mention shoplifting. I almost made Samson shoplift a stick of deodorant at Target today. True story.