Motherhood, thy name is Bessie 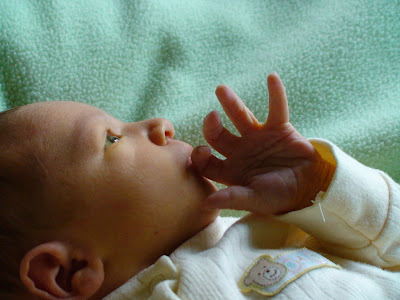 Day 12 of parenting...never has time held such little meaning for me. Twelve days? Twelve days? I've only been doing this for TWELVE DAYS?! Even though I've been relegated to the position of an on call dairy cow, I'm definitely feeling the love. 2007 has been an amazing year, and this culmination of awesomeness has really given our little family a capital F. It's still so early, and things will change big time when Max goes back to work, but we've really established some routine-like behaviors, as much as one can have a routine with a newborn in the house. Which is not at all.

Max is a terrific father (DUH). He's making sure to spend an adequate amount of time teaching Samson the ins and outs of Halo 3 while Samson sleeps curled up Daddy's chest, clenching precious, tiny fistfulls of chest hair. As a long time Xbox hater, I've surprisingly found myself calmed and soothed by the sounds of Halo. The familiarity, the background noise and lights, just knowing that these sounds mean that Max is contentedly sitting on the sofa, playing, make me feel so comforted. It means I have one less person to worry about, one less person/dog/cat who needs me right now at this moment. Someone who I love and care about tremendously is happy and content and it doesn't require anything from me. Not that Max is needy, it's more that I'm one of those over-giver-type of personalities, so just by the virtue of being in the same room as me, Max is entitled to the lion's share of my physical and emotional energy. And now that there's someone around who actually needs that portion of energy, it's nice to be able to give it to him and not worry about Max. Who is a grown up and can take care of himself. And the dogs. And the cats. And oftentimes me. Why do I need to keep reminding myself of that? 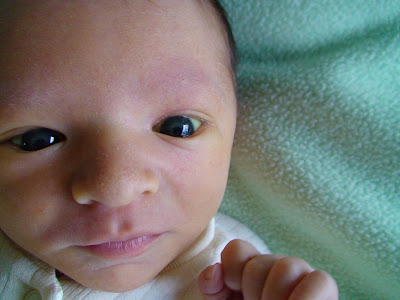 So day 12. So far, day 12 has consisted of eating, pooping, sleeping, and peeing on one of our precious few newborn-sized snuggies--the kind of garment that buttons up the front instead being pulled over the head. We learned back on day 5 or so that Samson hates hates HATES having clothes pulled over his head. Looking back, it's kind of like, duh, of course he hates it, but we were not prepared for this hatred and hence had zero newborn-sized clothes that did not induce screams of frustration from our son. Since then, we've remedied the situation but still have to do laundry daily in order to satisfy our snuggy demand. I would buy more, but I have the feeling that he won't be wearing the newborn-sized stuff for too much longer, so I'm holding out.

The dogs and cats have really adapted well to the fleshy pink intruder. Nobody really seems to care about him, even if he's crying. Which is perfect, because the last thing I need is for my already nervous dog to get anxious when the baby cries, or for my prone-to-grossness dog to devote his time to trying to get into the diaper genie. Or for one of my two generally unremarkable cats to decide that warm baby bodies are where it's at and we'd like to sleep in the crib now please. No, it's pretty much business as usual for the animal set, and I hope they appreciate the extra spoonful of wet food they've been getting at night or the very deliberate love and attention we've been trying to dole out regularly. Or the copious amounts of treats. 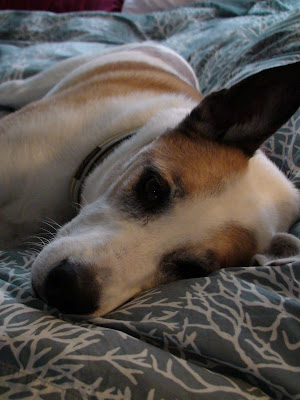 Later today we've got our 2nd appointment with the pediatrician. I can't wait to find out how much weight Samson has gained! I'm sure he must weigh like 10 pounds already. He eats SO MUCH and looks SO MUCH bigger than he did when we brought him home 8 days ago. We're raising a real prize piggie over here.

How could I not mention the brit? On Thursday, AKA day 8, the mohel did unspeakable things to Samson who was a real trooper about the whole affair. The secret ingredient: wine. They got the baby drunk first, and after watching him sleep ALL afternoon like a perfect little angel, it's really tempting to just dip a few fingers in bourbon before bedtime and let him suckle away.

One last thing. Hands. HANDS. Samson's favorite thing to eat is his own little hands. What's for breakfast? Hands. Lunch? Hands. Dinners. Hands, dammit. Hands.
Posted by Deborah at 11:12 AM