Something about a very small violin

I hate it that I haven't been blogging this month. October has been, like, a billion times better than September. But I'm going to be a wimp and go ahead and blame it on the move. I know, I know. It's weird: for the first time in 7 years, we're actually living somewhere that we plan to stay for more than a little while, so there's plenty of time to unpack wisely. Make sure that things get put in the place that makes the most sense and not just shoved in a closet to be dealt with "later." We can pick nice looking furniture that will last, and we can take our time doing so, instead of doing a frenzied IKEA run that inevitably ends in Swedish meatballs and tears. But I still feel so rushed, so pressured to unpack the boxes and buy the dishes and whatever else needs to be done. To do it NOW. Not easy with a one year old (almost!) who's as close to walking as I am to becoming an alcoholic. Not easy with a one-eyed cat who all of a sudden is nice to me, actually likes me and just needs to sit in my lap for another ten minutes, please, thank you very much. Yawn. Purr.

I know it's because Max is leaving in a few days and won't be back for three weeks, and I want to have the whole house ready by the time he gets back. After all, he works hard all day and earns money to pay our shiny new mortgage, and what do I do? I stay home. So the least I can do is make the house look perfect while I'm here. Actually, the least I could do is prevent the baby from falling down the stairs by laying my body on the floor to block his attempts while I watch the Today Show. Anyone with a baby at home knows that they are exhausting, I mean EXHAUSTING. After caring for a tot all day (and night, sometimes), there's not much time left for other things, say, like laundry and vacuuming and cooking. There is only time for napping and booze, and not necessarily in that order.

If it sounds like I'm making a lot of excuses, well that's because I am. It's hard to be the non-earner in the family, especially when you're the primary spender (something I am very very good at, by the way--like, stellar good). Which is totally retarded when the reason you're not earning is so you can stay at home and raise a demon child that feeds on your soul. 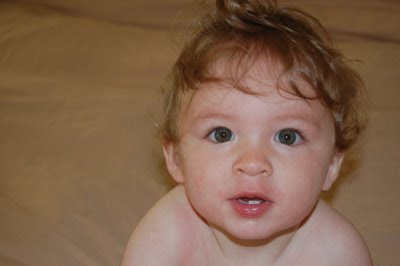 Tell me that your soul doesn't feel a little big soggy from being sucked on just now.
Posted by Deborah at 7:46 PM

I truly respect your willingness to be a parent and bring life into the world and raise that person into some semblance of a real human being. Me, I'm sticking to being fun Auntie LaLa and working in television where I can truly have an important impact on the universe. :) Stick with it...Samson will smile at you again soon and then it'll all be worth it and you'll want another one! Just ask Amy! Ha!

Holy cow I know exactly what you're talking about. And I wouldn't have been able to put it into words as coherently as you did.