This week's theme was social interaction. Samson had three play dates this week, two trips to Target and Family Chanukah! No wonder I'm so exhausted.

First we went to Dave and Sab's house to visit with Isaac who was born 3 1/2 weeks before Samson. Dave and Sab are old high school friends of mine. After years of being out of touch, we've recently reconnected. Having babies at the same time gives us plenty of stuff to talk about (you can only catch up and gossip about old friends for so long, right?), and it's really fostered this feeling of social nostalgia within me. It's the kind of reminiscing that makes me think of old friends and people who I lost touch with--I've always been horrible at keeping in touch with people--and wish I'd been better about writing or calling or emailing because now it's too late, now if I were to contact them it would just be weird. Right? Wrong. I google-stalked some folks from my past and found an email address for an old college roommate of mine. I sent her an email, she wrote back, and we've been corresponding ever since. True story. And she had a baby this year, too--I swear, it's something in the water (or the 30th-31st birthday cake). But I digress. 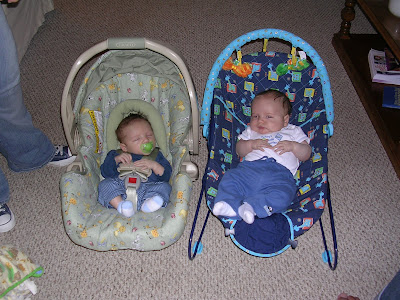 Social outing number two was the local hospital's weekly infant group. So imagine a room full of mommies and babies, none of which were as cute as my little nugget but that's beside the point. So all of these babies of varying ages from about 2 months to 9 months were laying around doing baby things...like SITTING UP and ROLLING OVER and GRABBING THINGS AND CHEWING ON THEM and it occurred to me, as I sat there wide eyes and freaking the hell out like a deer int he headlights that Samson will eventually do these things also. I mean, I knew that because I have lots of dogs and cats and everyone knows that puppies and kittens eventually become dogs and cats so it stands to reason that infants become babies and toddlers and kids and god help me teenagers and I'm nothing if not reasonable. So I know this. But it was like sitting there watching a coming attraction for all of things my little lump of warm, pink, aromatic flesh will be doing in the coming months. More than a little intimidating. But it also made me impatient, because those babies seemed to be having the time of their lives.

We capped off the play dates with another old-time-friend-turned-recent-parent, and entertained Amy and her 8 month old daughter Draven. Amy and I met in 1980. In kindergarten. Ahem. We've drifted in and out of each other's social circles throughout the years, so it wasn't too weird to see her. Plus her daughter's adorable so it's not like I paid much attention to Amy anyways. It's hard to compete with big eyes, a drool covered chin and a game that involves throwing the rubber ducky so that mommy can pick it up and hand it back to you. That kid is adorable--I really feel sorry for her dad. 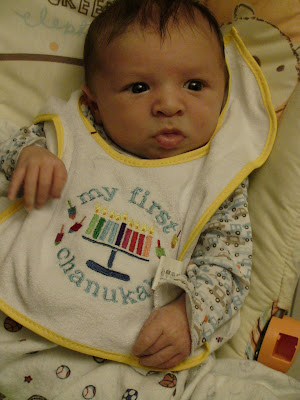 And then there was first night of Chanukah! Joined by grandparents, both in person and live via satellite, we celebrated with Samson and bestowed upon him his first, and what will no doubt be his most treasured Chanukah gift ever: a plush ostrich. Yet to be named.

Speaking of the most treasured Chanukah gift ever...I love Max.

Samson turn six weeks old on Thursday, and that truly boggles my mind. The little half smiles have begun, and soon--any day now--the honest to goodness smiles are going to start. Every now and then I wake up to the realization that it's been 5 HOURS since Samson last woke me up to feed him, and it shows. I can form complete sentences again. And carry on conversations with people. It's astounding. And maybe I'll even be able to blog regularly again. Hmm.
Posted by Deborah at 6:11 PM

I KNEW those smiles & nods were just to make me think you were paying attention. Just kidding, it was fabulous to see you & your adorable offspring : )